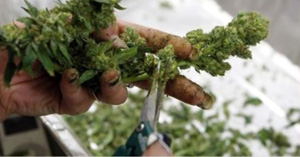 Increasing use of medical marijuana presents C-L psychiatrists with opportunities and dilemmas in equal measure.

Medical marijuana remains federally illegal in the US but increasingly legal for several clinical interventions, so far in nearly 30 US states.

Amidst the melee, several speakers at APM 2017 sought to “clear the smoke” and provide guidance to members negotiating these challenges. 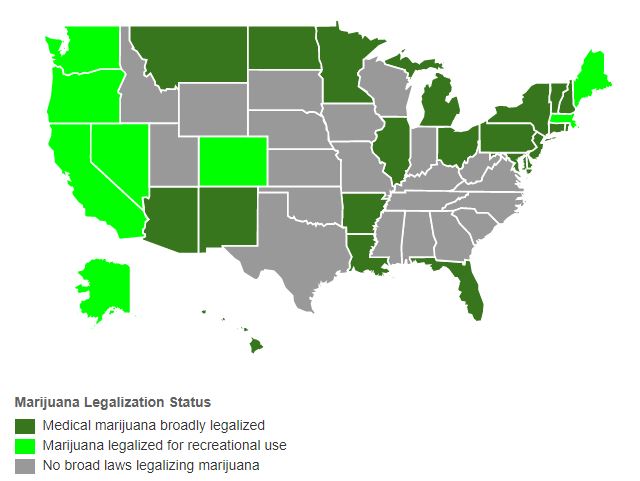 Source: GOVERNING: The States and Localities

Ilana Braun, MD, FAPM, Dana-Farber Cancer Institute, outlined the medical marijuana legal landscape and reviewed the biochemistry of the endocannabinoid system and the utility of medical marijuana in oncology.

Kristina Jones, MD, NYU School of Medicine, discussed evidence for the use of medical marijuana in HIV/AIDS-related conditions including anorexia and neuropathy. She reviewed side-effects, drug interactions, and impact on mood, cognition, and antiretroviral adherence.

Jennifer Hanner, MD, MPH, Tisch Hospital, NYU Langone Medical Center, examined evidence for its use in the treatment of epilepsy, as did Davin Quinn, MD, University of New Mexico School of Medicine, at the Neuropsychiatry SIG meeting.

Simon Sidelnik, MD, NYU School of Medicine, reviewed current literature and the legal status of medical marijuana for non-cancer pain and highlighted practical considerations, particularly against the backdrop of the national opioid epidemic.

So . . . what guidance can we draw from these experts? 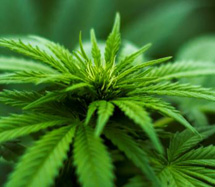 Dispensaries in the US offer non-pharmaceutical preparations of medical marijuana not of chemical purity standard to “ensure stability, safety and efficacy”, say experts. They often employ non-medical intermediaries to advise on products, delivery methods and doses.

The highest quality evidence to date supporting the use of medical marijuana is in the treatment of neuropathic and chronic pain – in patients with sensory or spinal nerve damage in long-duration pain that persists after alternative interventions.

That alone has the potential to be highly significant – as 100 million US adults are reported to suffer chronic pain and more than half of all annual visits by physicians result from pain symptoms. Pain-related health care costs and lost productivity exceed $600 billion annually in the US. Low back pain is the leading cause globally of productive years lost to disability.

When treating chronic pain adverse effects recorded include an associated decrease in IQ in adolescents; a 9% rate of addiction in adults, 17% in adolescents; chronic bronchitis; and lower birth weight.

In a US survey of nationally-representative oncologists, two-thirds considered medical marijuana effective for anorexia/cachexia and as an adjunct to standard pain management strategies. Almost half recommended marijuana, even though 70% did not feel equipped to do so.

Use with opioid disorder

Caution is also needed, say the experts, when advocating medical marijuana to reduce fatal opioid overdoses and opioid use disorder. While lethal ingestions are rare with marijuana, some findings show that its use may increase the risk of developing opioid use disorder and non-medical prescription opioid use.

Use of cannabis extracts to treat seizures in epilepsy is recorded by US and British physicians as far back as the late 19th century.

Whereas some current research shows no benefit, other controlled trials show a reduction in seizures of up to 50%. Current use in practice in New Mexico is reported to be “very effective”: “Medical cannabis is on the horizon, if not already here,” says one of the experts.

By comparison, evidence is lacking to date to support the use of medical marijuana in treating acute pain, headache disorders, and rheumatic diseases.

Trials using medical marijuana in acute pain cases have shown no benefit over placebo comparisons. And—despite preliminary and anecdotal evidence suggesting potential benefits—experts report “insufficient evidence” from clinical trials to support cannabis in the treatment of headache, and “insufficient high-quality evidence to draw robust conclusions” from trials using marijuana to treat rheumatic pain. (There have been reportedly no studies to date on medical marijuana in the treatment of fibromyalgia.)

The National Academies of Sciences, Engineering, and Medicine provided expert committee opinion as recently as January 2017: “There is conclusive or substantial evidence that cannabis or cannabinoids are effective for the treatment of chronic pain in adults.” It added that clinical improvements are modest and limited to neuropathic pain.

In practice, say the experts, prescribing medical marijuana should be considered when: