Wealth of Innovation on Display in Poster Session

Your chance to meet future leaders of our specialty

CLP 2019 will feature 168 posters arranged into major topic groups, on display during a dedicated timeslot in the program on Thursday, November 14 (5:30 – 7:30 PM), in the Nautilus Ballroom at the Sheraton San Diego Hotel & Marina. Many of the posters are presented by trainees—so it is an opportunity to interact with the future leaders of our field.

Here and in the next issue of ACLP News is a random selection of what’s on offer with supportive comments from one of the organizers, Janna Gordon-Elliott, MD, FACLP. Dr. Gordon-Elliott and Dahlia Saad-Pendergrass, MD, are the leading lights behind this year’s Oral Papers & Posters Subcommittee. All poster abstracts can be reviewed online ahead of the meeting. 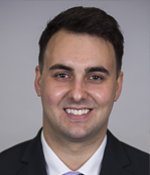 More than 40% of post-cardiac arrest patients experience psychiatric sequelae and approximately 20% report worsened quality of life as a result. Only recently has the incidence of these conditions been elucidated, resulting in increasing attention to the psychiatric needs of these patients, both in the hospital and after discharge.

The most common psychiatric diagnoses after consult were depression and delirium, each comprising 20% of diagnoses. Anxiety disorders, non-alcohol substance use disorders, and cognitive impairment accounted for 18%, 14%, and 12% of diagnoses, respectively. Patients averaged two diagnoses each. Only one patient in this group was diagnosed with PTSD. Five patients (19%) died before hospital discharge.

Among those who survived to discharge, six (27%) attended outpatient psychiatric follow-up within six months and 16 (73%) did not.

Dr. Gordon-Elliott: “Cardiac arrest—rather than being a single disorder or condition—is a disastrous outcome that occurs as a consequence of a variety of medical processes, and across a range of populations. From the common starting point of cardiac arrest, patients are managed in an array of settings and experience divergent medical courses. Further knowledge gleaned from these authors’ findings may lead to increased awareness of the mental health needs of post-cardiac arrest patients, potentially unifying the efforts of the diversity of practitioners who care for them, and resulting in improved treatment and outcomes. We are eager to see the final poster to explore the conclusions the authors make based on their data.” 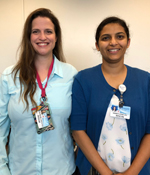 Sapneesh Jatana, MD (right), with Jolene Hillwig-Garcia, MD, who is mentoring her for the poster

Technology consumes an ever-increasing amount of our children’s and adolescents’ time. Literature reports mixed results when examining the effect of increased usage on children’s psychiatric symptoms and behaviors. Pre-adolescents are known to be especially vulnerable to peer influence and to act impulsively.

Over just eight weeks, four cases were presented to our pediatric C-L liaison integrated care service in which pre-adolescent females were influenced by social media, resulting in suicidal ideation and presentation to the emergency department.

For two patients, social media use assisted in seeking appropriate support, while social media use was the antecedent of suicidal ideation or suicide attempt for two other patients. All cases had psychosocial stressors, including limited support, unstable home environment, and low self-esteem.

Existing vulnerabilities may be exacerbated due to social media usage. Social media can lead to increased exposure to self-harm behaviors as users may encounter negative messages and adopt self-harm practices. However, while some pre-adolescents are being influenced to act on suicidal ideation, others use social media to seek support.

Parental monitoring of adolescent online behaviour, as well as encouraging disclosure in the parent-child relationship, will help keep children safe online. Through integrated care and C-L Psychiatry services, primary care providers can be trained to have conversations regarding structure and monitoring of online activity with pre-adolescent patients and their parents.

Dr. Gordon-Elliott: “Suicidal ideation and behavior are catastrophic consequences of the ill-effects of social media influence on youth; the negative mental health impact of social media use can present more moderately, as well, such as with anxiety, impaired self-esteem development, and social inhibition. While changes continue to occur in terms of how our societies engage with social media, this complex cultural phenomenon is not going anywhere and we must learn how to adapt to it and manage its effects. This poster delves into this fascinating topic, offering insight into how C-L Psychiatry providers can assist the first-line medical providers of youngsters to think about the complex ways in which social media use impacts personal development, to detect and manage its negative mental health effects, and to communicate with their patients about the healthy use of social media.”

When Does Catatonia End and Active Dying Begin? The Complexity of the Assessment and Treatment of Critically Ill Psychiatric Patients Transitioning into End of Life
Stand 53 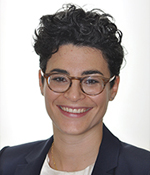 Our palliative and psychiatry C-L teams frequently collaborate, bringing their distinct yet complementary medical expertise together for the benefit of a shared patient. Our case highlights the complexity of the assessment and treatment of critically ill psychiatric patients transitioning into end-of-life.

Mr. C is 66 years old with a past medical history of hypertension, diabetes mellitus type 2, chronic obstructive pulmonary disease, and a psychiatric history of schizoaffective disorder, with numerous prior psychiatric hospitalizations, who was transferred from an outside hospital to our urban medical center for work-up of autoimmune encephalitis and trial of plasmapheresis and high-dose steroids.

This case is compelling due to how closely the clinical presentation of end-of-life and psychiatric decompensation resemble each other. Both these medical and psychiatric emergencies affect each other in a bidirectional way. Finally, we postulate that the patient started dying sooner than the providers had suspected.

Unusual medical presentations should be evaluated closely to include psychiatric illnesses as a differential diagnosis. We hope to bring forward learning tools to bridge both fields of psychiatry and palliative care in thinking critically about our presented case.

The C-L Psychiatry and palliative care teams unequivocally overlap in their work during times of medical complexity and acuity. This case highlights the necessity for both fields to have a more thorough medical and clinical understanding of the various presentations of both psychiatric decompensation in the critically ill as well as pathological signs of the active dying process.

Dr. Gordon-Elliott: “This case highlights clinical challenges that are common in the treatment of patients at end-of-life. During this period, management priorities often change, emphasizing symptoms over diagnoses; time is limited and quality of life may be given precedence; and complex emotions and interpersonal dynamics can influence the perception of what is occurring and how best to address active issues. The phenomenologic overlap between catatonia and terminal delirium is an example of the type of clinical question that can perplex providers, sometimes disrupting the flow of team-based medical care and optimal management of the patient. This poster, by articulating this challenge, and the problems that arise as a result, will generate a fascinating discussion, relevant to the work that C-L psychiatrists do every day in every setting.”

A Case Report: The Successful Use of Clonidine in the Treatment of Panic Attacks
Stand 95 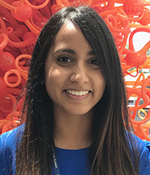 Anxiety disorders are generally defined by excessive worries about future uncertainties that lead to significant social or functional impairment. Panic attacks are classified as the sudden onset of overwhelming and incapacitating fear. Clonidine is a centrally acting alpha-2 agonist which has been traditionally used for treatment of hypertension, and more recently, ADHD. However, there are a couple studies which have also demonstrated clonidine as an effective, acute anxiolytic agent for panic attacks in some patients.

We present a patient with panic attacks seen as a psychiatric consult who experienced minimal response with lorazepam or propranolol. Her symptoms responded to treatment with clonidine. We briefly review the underlying mechanism of clonidine as an α-2 agonist and its role in anxiety and opiate use disorders.

Clonidine is thought to suppress firing of the locus coeruleus cells and thus decreasing noradrenergic output. Through this mechanism, it is thought to have anti-anxiety effects and has previously been described to attenuate anxiety like withdrawal states in the context of opiate use. It is thought that serotoninergic disturbances result in more chronic anxiety, whereas noradrenergic imbalances result in anxiety attacks. In the case of our patient, this may suggest why she preferentially responded to noradrenergic treatment despite longstanding treatment with serotonergic agents.

In our case, we describe a successful use of a previously under-documented method of treatment. We offer an alternative of utilizing clonidine for the treatment of panic attacks opposed to the use of benzodiazepines, especially in patients with histories of comorbid substance use disorders.

Dr. Gordon-Elliott: “The C-L psychiatrist is optimally positioned to take ownership of panic, as a quintessential mind-body symptom. For the patient with panic, psychological processes are manifesting physically, often demanding medical attention and complicating other medical conditions and their management. The C-L psychiatrist can play an important role in identifying and conceptualizing these symptoms, developing potential interventions, and educating patients and medical colleagues. In their poster, the authors present a vivid case example of a C-L psychiatry team’s creative and effective treatment approach to panic, with a thoughtful rationale and discussion.”