Memories of the Academy through the decades—providing practical support, especially for new recruits to the C-L Psychiatry subspecialty—are being captured in a video ‘story bank’ featuring leaders and pioneers from ACLP since its founding in 1954.

As the video archive grows it will become a lasting record of the Academy for future generations of members.

The Board has commissioned a former president of the Academy to lead a task force to capture a first wave of recordings for the archive—John Shuster, MD, FACLP, a Veterans’ Administration psychiatrist at the Tennessee Valley Healthcare System, who was Academy president in 2010-2011, advanced the history project by interviewing members on video during CLP 2019 in San Diego.

He says the narrative bank will offer collective wisdom from pioneers and leaders in the Academy and within C-L Psychiatry.

During CLP 2019, Dr. Shuster interviewed five long-standing members with narratives to tell. He expects to line up 12-15 interviews to complete the first wave of recordings, including with members not able to attend the ACLP Annual Meeting.

The initial interviews were recorded in San Diego by professional videographers hired for the event. Further videos will include some taken by early-career recruits to C-L Psychiatry using a camcorder or iPhone. “We are more interested in content than in production values,” says Dr. Shuster.

At the end of the first wave of recordings, the Board is expected to review content “before, hopefully, letting it run,” says Dr. Shuster.

As ACLP News caught up with Dr. Shuster, he had just recorded an interview with Roger Kathol, MD, FACLP, who was president of the Academy in 1997-1998. 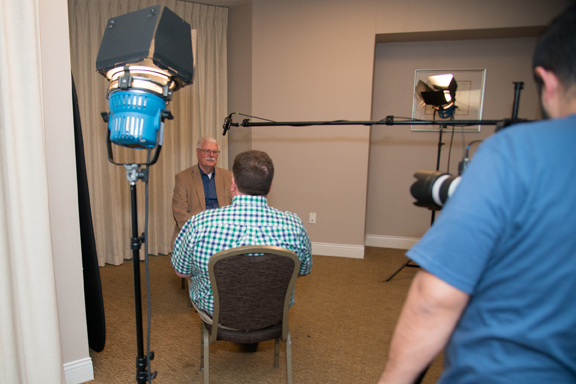 Some interviewees relate anecdotes from their experience, showing how the Academy has evolved, but the main content focus aims to benefit members in their practice as C-L Psychiatry develops—offering experiences of pitfalls and opportunities.

So what experience snippets have Academy members divulged so far? “You’ll have to wait and see!” says Dr. Shuster, enticingly.