Reliable treatment on the road to recovery

You’ve just consulted to Ms. A, a woman admitted to a medical inpatient unit for possible myocardial infarction. You were called because each application of electrocardiogram leads caused the patient distress and she became tense and agitated. You elicit a history of previously undisclosed sexual trauma and diagnose PTSD. She’s willing to start psychotherapy, but access to trauma-focused psychotherapy in your area is limited. How can you keep her engaged and starting on the road to recovery between her hospital discharge and her psychotherapy assessment?

They can help with screening, psychoeducation, self-management, and symptom tracking. They can be initiated promptly while patients are awaiting access to formal treatment and can help motivate patients to engage in treatment.

Some can be used to supplement and support formal treatment (‘treatment companion’ apps), facilitating measurement-based care and homework assignments.

Apps can be used discreetly, which matters to people concerned about stigma and/or privacy. Many people have a mobile device with them nearly all the time and rarely turn it off, which eases access to tools and information.

Unfortunately, however, there are barriers to effective use of mobile mental health apps, such as cost, lack of privacy protections, and lack of quality control.

As a major public health agency, the Department of Veterans Affairs (VA) set out to reduce those barriers by developing a suite of mobile mental health apps that are widely available, accessible to individuals with different abilities (e.g., compatible with assistive software technologies), evidence-informed, privacy-preserving, and free of charge to the public.

While geared to military personnel, veterans and their family members, these apps are useful for civilian populations as well, says ACLP member Laura Miller, MD, medical director of Reproductive Mental Health, at the Office of Mental Health and Suicide Prevention, VA. Dr. Miller is a member of the Academy’s Military & Veterans SIG. 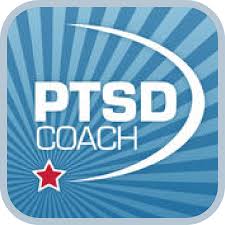 PTSD Coach opens to a home screen inviting the user to choose among four options: managing symptoms, tracking progress, learning, and getting support. Quick access to crisis resources is also readily available. “The app is replete with engaging, easy-to-follow, appealing tools for managing symptoms, which is its most popular use,” says Dr. Miller. “Each tool invites users to rate their distress before and after using the tool. Users can save their favorites for ease of revisiting as needed.”

PTSD Coach was created due to the high prevalence of PTSD and other trauma-related mental health challenges among military veterans, along with a community-wide dearth of providers equipped to offer evidence-based, trauma-focused therapies.

Since its creation, more than 15 additional VA mobile mental health apps have been developed. Some apps are designed primarily for self-management; others are designed as treatment companions for patients engaged in evidence-based psychotherapies.

VA’s app development
The choice of which apps to develop is considerably influenced by feedback from users of already-developed apps.

The national VA mobile app development team also explores app stores to identify key gaps in available products. For example, Dr. Miller is currently working with the team to create a new women’s mental health app. This was chosen in part because women are a rapidly growing segment of the military veteran population. “It was also chosen due to a dearth of high-quality, accessible women’s mental health content among generally available apps,” says Dr. Miller.

VA apps are developed using human-centered design. The app team receives feedback throughout the process from people representative of intended app users (e.g., military veterans and their caregivers) as well as from clinicians and subject matter experts. This includes feedback about design features, usability, onboarding. and personalizing the apps, as well as about content.

All VA mobile mental health apps are free to download and have no in-app purchases. They are designed to be fully accessible to people with auditory or visual impairments, using features such as screen readers and subtitles on videos. They adhere to rigorous privacy standards, never collecting or sharing personally identifying information. However, some of the apps are designed to collect fully de-identified, user-generated data for research or quality improvement purposes, such as which areas of the app people visit.

Despite these encouraging findings, additional data reveal room for further improvement in engagement with mobile mental health apps. An example is Mindfulness Coach. Unlike many of the other apps in the suite, Mindfulness Coach encourages users to progress through 14 levels as they acquire mindfulness skills.

Since its release to the public in January 2019, Mindfulness Coach has been downloaded thousands of times per month, with steadily increasing numbers. The elapsed time between first and final uses of the Mindfulness Coach app averaged 4.1 weeks, with an average of 4.3 visits to the app per user and 49.2 clicks within the app per user. Although a subset of users was highly committed to the app, the level of engagement with the app varied widely. Time spent with the app strongly correlated with improved mindfulness skills. “Data like these are spurring ongoing efforts to improve engagement and link mobile app use to formal mental health treatment,” says Dr. Miller.

“One effective way to facilitate mobile app use is to train clinicians about potential benefits of app use in clinical care, and how to suggest apps and incorporate them into treatment plans.”

“For example, for patients who might benefit from mindfulness skills, C-L psychiatrists can help them download the Mindfulness Coach app and set a goal related to reviewing the app or trying one of the mindfulness skills. The psychiatrist can show them the app’s built-in reminders and encourage them to set the reminders right away. This can help patients start building skills and momentum toward recovery even if they’re not yet engaged in ongoing mental health treatment.

“Apps are also useful in C-L Psychiatry settings for patients who are reluctant to engage in psychotherapy, or who are having difficulty accessing psychotherapy. For example, cognitive behavioral therapy for insomnia (CBT-I) is a highly effective form of psychotherapy that is in short supply in some regions. The Insomnia Coach app includes psychoeducation, sleep diaries, and relaxation techniques. It can serve as a useful introduction to the basics of CBT-I and sleep hygiene.

“In introducing mental health apps to patients, C-L psychiatrists can encourage adherence by involving others to assist when needed. Care managers, peer support specialists, trusted friends or family members can help patients download apps, troubleshoot them, and engage with them.”

Ms. A is about to be discharged from the hospital. She has an appointment for outpatient psychotherapy intake two months from now. Before her discharge, you helped her download PTSD Coach and showed her its key features. She’s tried it out in the hospital and is relieved that she wasn’t required to enter any personal information. The self-assessment helped her confirm and accept her diagnosis of PTSD. She especially likes the grounding and positive imagery tools and has placed them in her favorites for easy access. She plans to use the app on the train while commuting to and from work, since no one around her will be able to tell what she’s doing. She’s read the section of the app that explains trauma-focused psychotherapies, which has helped her frame questions to ask at her upcoming assessment. She thanks you for launching her on the road to recovery. 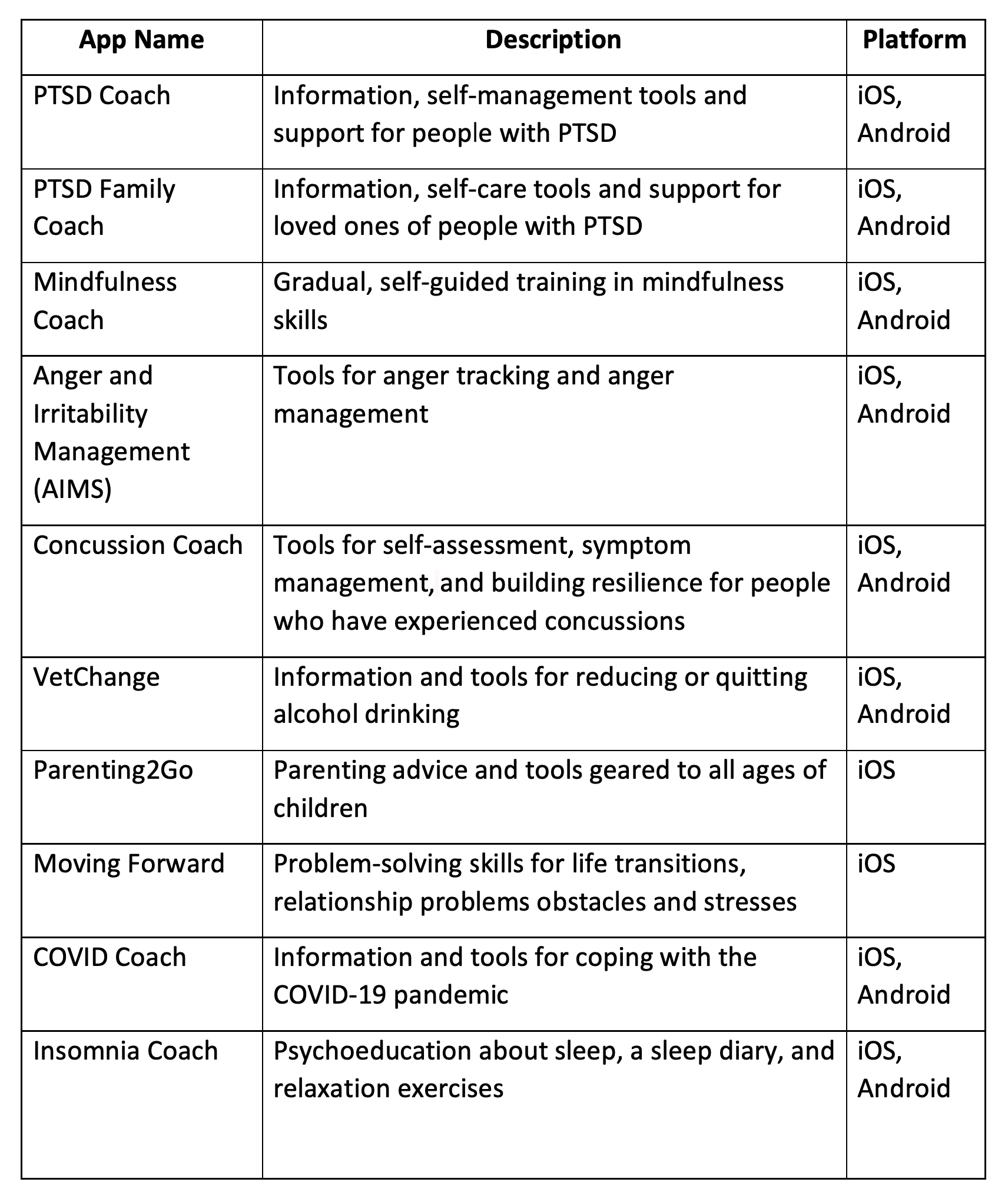 “VA mobile mental health apps are free to download and have no in-app purchases.”